“Imagine you were lying in the gutter and you had time to sing one song before you die, just one song, what would that song be?”

That’s a good question for all of us. That’s what a record producer asked Johnny Cash in the movie “Walk the Line.” Cash had just gotten out of the military and he was trying to make a living going door-to-door as s salesman but he wasn’t very successful. He had a small band and they wanted to cut a record. So they got an appointment with a record producer.
They were singing a gospel song and it was dragging. The producer stopped them and asked, “Do you have anything else?”
Cash asked why he didn’t like their song?
The producer said, “Cause I don’t believe you.”
Cash took the question the wrong way and said, “You don’t believe I believe in God?”
The producer replied, “You know exactly what I mean.”
Then he said, “Let’s imagine that you were lying in a gutter and you were about to die… you had one minute to sing a song that you believed… what would it be?”
After thinking for a minute, Cash began to play another song… one he had written.
“I hear that train a coming, It’s rolling round the bend.
I ain’t seen the sunshine, Since I don’t know when.
I’m stuck in Folsom prison. And time keeps dragging on…”

The producer liked the song and the rest is history.
So, today is Sunday… lots of people will go to church. But, does the world believe us?           Does the world believe that we are really believers just because we go to church?
Think about what that producer said to Johnny Cash… “If you had one song… and one minute to sing it..”
So, let’s imagine we have one minute to tell the world why we believe in Christ? What would we say?
“I go to church on Sunday.”
Ok, that’s good… but lots of people go to church but it seems to make no difference in their lives.
“Well, I read my Bible.”
Ok, that’s good too but lots of people read the Bible but the Bible hasn’t changed them.
So, if we had one minute to tell the world why we are a believer, what would we say? Has Jesus made a difference in our lives? If he hasn’t, we need to evaluate our faith.
Has he made us more loving? More caring? More compassionate? Do we love our fellow man?
So, you are lying in a gutter… you have one minute to sing a sing to convince people that you are a believer… what would you say? 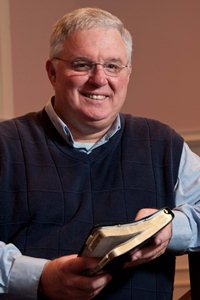 I am Gregg Potts, a Christian writer and communicator. I am married and have three children and one grandchild.
This is my personal blog. I primarily blog about Christian living and the church but I occasionally touch on sports or politics. I will also post some stories or quotations that other Ministers can use...Read more